The Pantheon is a beautifully impressive building. It’s about 2000 years old and faces Piazza Della Rotonda, a big square with many restaurants, cafes and shops around it. You will find a lot of locals and tourists sitting outside and taking in the stunning view of the Pantheon. In the middle of this charming square you can see a beautiful 18th century fountain. Right in front of the Pantheon you can hire a horse-driven carriage, which will take you around the center part of Rome. They ask around 150 euro for a one hour tour up to 4 people.

There is no entry fee, but there will be a line that is fast moving. It’s the world’s largest unreinforced concrete dome with such great history that took my breath away. You walk inside and you will be in awe of the architecture. From the portico in the front, the beautiful wall paintings and marble sculptures. Stunning concrete dome with the “Oculus” or circular hole in the top of the roof. The way it catches light is remarkable. The floor is angled slightly to catch any rain and drain water out when it does. It holds the tomb of famous artist Rafael and his fiancée and two burial crypts housing the bodies of former kings of Italy. I was amazed to see this ancient building so well preserved. There aren’t many places full of so much history that are free so this one is definitely worth a visit. My favorite time to visit the Pantheon is around noon, this is the most beautiful time to see the interior and observe the scene of the sunrays beaming inside through the Oculus on a sunny day. Highly recommended to all visitors.

The Pantheon was built around 25 BC by a general named Marcus Agrippa to commemorate the victory of the naval Battle of Actium against the forces of Mark Antony and Cleopatra VII of Egypt.

After the building burned down in 80 AD, Hadrian, a cosmopolitan emperor, rebuilt it in 125 AD. He dedicated the Pantheon, which means “Temple of all the Gods” to every known God.

You’ll find an currency exchange booth when facing the Pantheon to your left, entering Via dei Pastini which eventually leads you towards the Trevi fountain.

In Via Giustiniani 8B, which is a small street starting to your left from Piazza della Rotonda when you have your back to the Pantheon, you’ll find one of the few supermarkets Rome has in the old down town.

The Pantheon is in the middle of it all and has many close attractions. Church of San Luigi dei Francesi is one of the nearest followed by Piazza Navona with it’s amazing fountains and Sant’Agnese Church. Campo de Fiori is in the same corner and can be done when in that area. 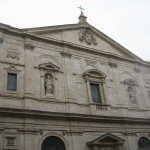 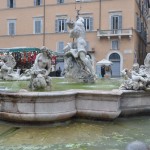 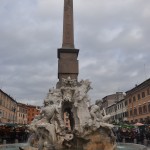 Fountain of the four rivers 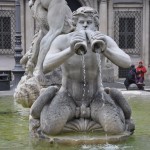 A Tritone blowing a horn 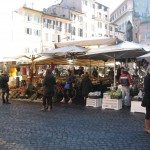 The market place is in the middle of the square 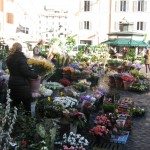 Flowers are sold as well at Campo de Fiori

If you go the other direction you can visit the Trevi fountain, Via del Corso and the Spanish steps. 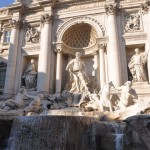 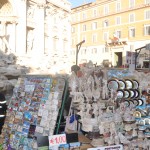 Souvenir stand next to the Trevi fountain 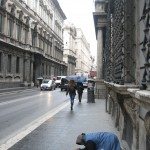 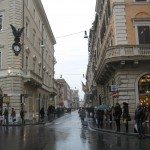 Via del Corso is a very long street with restaurants, shops and boutiques all along the way 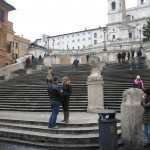 Spanish steps are one of the most famous attractions in Rome 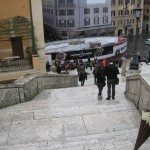