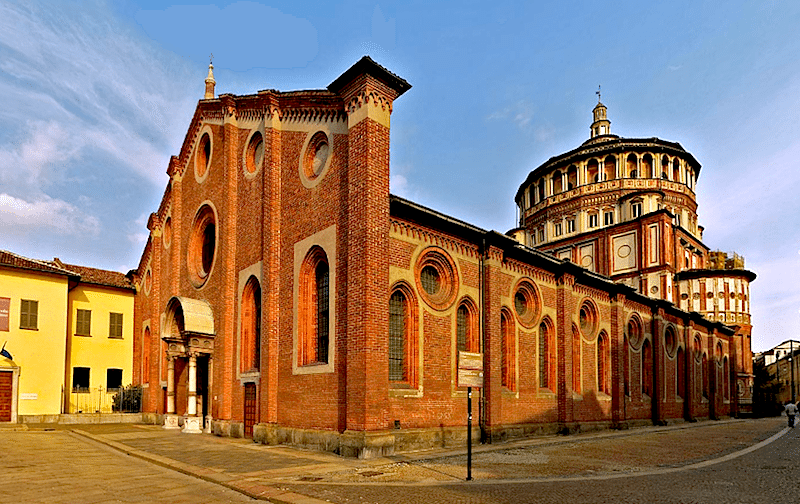 In 1980, Church of Santa Maria dell Grazie became part of the prestigious UNESCO World Heritage List for the main reason that it is among the most important creations during the Renaissance. The basilica itself, is a beautiful and serene place. The Gothic architecture is stunning, while the carvings and white pillars are very elegant.

The main reason for the church being on the list is that a national and cultural treasure is located deep within its vaults. The mural of the famous The Last Supper by the talented Leonardo da Vinci.

Accessing The Last Supper is a bit off-putting. However, it is very much worth the effort. The church uses an automated timing system on the their doors, so that The Last Supper Milan is not exposed to the outside environment. This means you are locked in several stages, including the gift shop. While waiting to enter, there is information explaining the history of the painting and the artist placed on the walls. Your group is allowed to stand with the painting for 15 minutes in a temperature regulated room. Detail are marvelous. You can see their emotions on how they felt when Jesus declared that he would be betrayed by one of his disciples.

The walls where the original painting was located has been repaired almost back to how they were before the bombs that dropped during WW II. This caused major damage, but luckily, it was not totally destroyed. According to sources, Leonardo did not use a damp-proof material for the mural. Nonetheless, it is still a good thing to know that for many years, preservation efforts have been carried out in the attempt to maintain the beauty of the painting.

Church of Santa Maria dell Grazie was built because Francesco I Sforza, the Duke of Milan that time, wanted to have a Dominican convent and a church dedicated to St. Mary of Grace. The groundbreaking happened in 1463 under its main architect Guiniforte Solari. Although it only took six years for the convent to be completed, the construction of Santa Maria delle Grazie church took several years to finish. Three decades and four years have passed and Francesco I Sforza was already succeeded by Ludovico Sforza, who wanted the church to be the private burial place of the Sforza family. When Ludovico’s wife Beatrice died, she was buried in the church. This happened in 1497, the same year the church was completed.

With just a 15-minute walk from the Duomo, you can reach the church of Santa Maria delle Grazie. Furthermore, keep in mind that the church is in between two metro stations, Conciliazone and Cadorna Triennale.

Please, be advised that tickets are limited to see this legendary painting. They sell out very fast, sometimes months in advance. Make sure to do a lot of research online ahead, and book your tickets in advance. You can also book it as part of a walking tour; they speak English. You need to arrive at least 15 to 20 minutes before the stated time. No pictures or video is allowed.

Dialogue in the Dark Milan